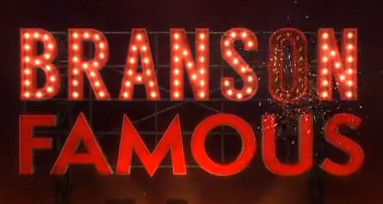 I try to reserve articles for this Blog to feature things that I am really inspired by and so I wasn't sure if this was something that I was going to want to place here or not. The more I thought about it the more I realized that my inspiration for writing this would be the things surrounding something I wrote last night and some events that I have been a part of the last several months. Hang with me for just a minute and this will all make sense as I wrap up.

I have had the opportunity to enjoy the Arts for most of my life. I have always enjoyed singing and I have always appreciated good Music and Literature and Art. As I was brought up I was always told by mentors in areas I pursued that a gimmick might get you attention but true excellence will create a legacy.

I work in the city of Branson, and I really like this town. I have been a part of it for over 20 years now and it has been home to me for a very long time. I have witnessed some truly inspiring things while I was here. Glen Campbell performing Amazing Grace vocally and with bagpipes was something I will never forget, and I know it inspired others as well. Jim Stafford, amazing comedy and guitar picking, makes the audience roar and and then sit in awe all at the same time. some of the things I witnessed him do with a guitar just blew my mind. I even had the ability to see Paul Revere and the Raiders in Branson, Missouri. Every time they performed a new song I found myself saying I didn't realize that it was them who did those amazing tunes that I remembered singing as I was growing up. No one will ever forget Andy Williams and what he brings to Christmas time. He will certainly be missed, and I know the Branson audiences miss him and the crowds he brought in to see him.

It's got to be hard for a family show in Branson to compete with a lot of this, I mean, these other guys made it big outside of Branson and have had the opportunity to bring that here. A family show like The Presleys or Baldknobbers don't have quite the same publicity pull to bring people to them. So, with that you probably have to do some things that are a little off the norm for some of these others. I believe the Dutton Family tried to get some attention on America's Got Talent, Some of the other shows have pulled some of their talent from American Idol performers in addition to other similar shows. Now it seems that the Baldknobbers has decided to come out with a show called "Branson Famous"

This show follows the Mabe family as it struggles to fight for relevance in a new world of entertainment that is passing them by. It's been the fodder for review writers from Variety, AVClub, and the New York Times. They even seem to get attention from The Soup which definitely brings attention to Branson as a city. If we go back to the comment I made before about a gimmick getting attention this would certainly fall under that category. My question is, did they create a bad storyline because it's similar to the mediocre talent that the show truly reflects or is it just poking fun at the town in general? Either way I don't really feel like this negative attention is something that a struggling community of Family Shows really needs. Without real talent base this show has really drawn a lot of criticism, but the worst part is when people see this they see it as a reflection of what Branson truly is. Joel McHale compared the show to the "Stench of a Tire Fire".

I spoke pretty harshly on Facebook regarding "Branson Famous" and how the Oscars wouldn't be giving them any kind of award for excellence. I got a comment back inside of five minutes saying that they wished I hadn't picked on them because they represent our city. Frankly, I did let them have it for exactly that reason. The funny part is the younger generation of Branson folks came out and talked about how they are embarrassed to tell folks they are from Branson when that show is mentioned. This kind of sophomoric gimmick is the last thing a town like Branson, Missouri needs in it's corner.


One of the more vocal marketing reps for the city (The aforementioned Facebook post) also stated that the last thing Branson needed was someone like a Madonna or Lady Gaga to come to our town because it didn't represent us. Did anyone see the pure excellence at the Oscars last night when Lady Gaga blew up the stage in celebration of Julie Andrews? What Branson really needs is for our old way of thinking to pass to the side so that we can stop accepting mediocrity as a standard in Branson. Fabulous talent like The Presley's and Six don't need the reputation of a show like "Branson Famous" hanging around their neck like a rusty cowbell. When junk like that hits the airwaves it represents our Shows, Hotels, and Restaurants simply because they put the name of our town in it. The reason why shows like "Breaking Bad" and "The Simpsons" mention Branson is because people can connect that to the mediocrity that is reflected in the reputation. So, a show like "Branson Famous" is going to reinforce a standard that doesn't reflect that we have raised any kind of a bar for truly excellent performance.

Louis Darby, a Branson Musician who has been in the game here since 1987 states, "The more the better. Get Branson back on the map. It's been said that even bad publicity is better then no publicity."

I think this "Old way" of thinking is exactly what is hurting Branson and its reputation today. To the marketer that screeched we don't need the likes of Madonna, Lady Gaga, or Miley Cyrus in our town needs to remember that Glen Campbell and some of our other great performers had less than perfect reputations at one time. Maybe it's time for some ideas that embrace what Branson is truly about and stop accepting vocals that resemble a cat fight in a nearby alley. When I walked down the Branson Landing today I heard a Madonna song playing probably because that is something that people tend to enjoy listening to. The majority of restaurants play songs that include artists that some of our marketing people thinks would be a bad representation of the community. It seems it's here because that's what is comfortable for people. I was in Vegas several months back while I don't think gambling is our answer here I do believe that the showmanship is of a whole different level and we have a ways to go to compare - Just Sayin'. If a mediocre gimmick is all a family show has to offer anymore to the city perhaps it's time for that family to decide if it's really helping the community or if this is just something that is designed to be a last gasp of a dying show. It's not fair to hang that around Branson's neck. Too many of us really love this town and are inspired by what is really good and can be again if we focus on bringing excellence to the forefront.

I'd love some dialog here, because I know I don't have the only opinion that counts in the community. As a Dad and a Marketing Professional I have interest in my community. I know others do to. I look forward to hearing from you.